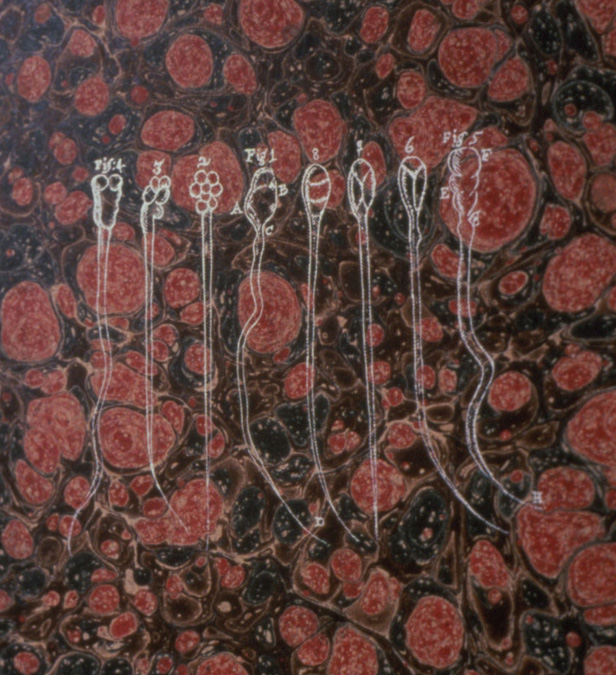 The Spirit and The Letter and The Evil Eye, Bath Festivals Trust ‘WellSpring’ (with Lyne Lapointe, 1994)

Bookbinding, marbled paper, letterforms, the printed word, eye-hand coordination, amulets, craftsmanship, inkhorns and more all came under scrutiny in this site-specific project grafted seamlessly into the existent Book Museum at Bayntun’s Bookbindery.  Through the very body of the book, this project dissected the book as a form and the alphabet as visual signs in animistic terms, as well as the relationship between the human desire to decorate with patterning and our intuitive understandings of organic structure.  The project was curated by Antonia Payne and Angela Kingston, as part of their city-wide project for Bath entitled ‘WellSpring.’

This was the beginning of a major preoccupation with the book as a form that would continue throughout both academic and artistic aspects of my career for at least a decade.  Concurrently with Introduction and Index, and just prior to Open Book, The Spirit and the Letter and the Evil Eye can be seen in direct reciprocity with the work I was later to do on my MA in the History of the Book.  In the existent displays of the Book Museum, our interventions — both objects and graphics — rewrote some of the historical subtexts, positioning the book object in the ‘thick description’ where it belongs, but in which field it is often invisible.

The huge mural composed of patterned book covers, both leather-tooled and marbled, was created from disbound cover boards purchased from Bayntun’s.  Silkscreened overlays and other graphic interventions parse meanings both overt and hidden evident in the covers themselves.  We later exhibited the mural at Susan Hobbs Gallery in Toronto (1995), and in Studiolo (1997-1998).

Several publications were also related to this project: the catalogue for WellSpring contained a bookwork also entitled The Spirit and The Letter and the Evil Eye.  Composed mainly of quotations both textual and visual, the bookwork gave a sense of just how far and how deep the subject of the book itself could go:

“Letters spell out a text…  Are these fixed shapes to be learnt, or are they capable of variation?  If so, how far can they be varied?  For what reasons?  When for example, is an A not an A?  In what way does it have to be altered in order to become meaningless, or a shape with some other meaning?… As an historian of lettering I do not find the idea that the letter has only one, or two, majuscule and miniscule precise forms tenable… In my opinion the criterion as to whether a letter is an ‘A’ is whether the writer thought of it as such.  This does not mean that all such ‘A’s are aesthetically good, but that neither identity nor goodness are derived solely from conformity to the Roman letter.  A letter must have identity to be recognizable, but this identity refers to a composite, flexible idea in the mind.”

“A Paduan or Venetian “Sarcophagus” Binding, c. 1485.  Valerius Maximus, Facta et Dicta Memorabilia.  [Venice, Joannes and Gregorius de Gregoriis, de Forlivio(?), c. 1485]   General description:  Brown goatskin over wooden boards with blind tooling and brass fittings.  Some repair (20th century).  Note:  The decoration is based on late Roman sarcophagi from the area of Ravenna.  The motif was copied on bindings for the first time by the Veronese humanist, Felice Feliciano (1433 – 1479) and was imitated in several cities in northeastern Italy between 1475 and 1500.”

“Men have always found it easy to destroy fellow human beings.  It has been much more difficult to eliminate the thoughts and ideas for which such people gave their lives…  The books were destroyed along with their authors in the mistaken belief that the ideas embodied in those books could as easily be destroyed and permanently eliminated…Since the compilation of the Index of Forbidden Books in the 16th century — the Index Librorum Prohibitorum — history focussed on the destruction of the printed word.  Yet this violent revenge on human thought was not the brainchild of the Inquisition.  The burning of books had been associated with Christianity since its establishment as an official state religion…  This highly effective means of early Christianity was adopted in the Middle ages even before the courts of the Inquisition came into being.  Although pre-13th-century Europe widely lacked original concepts and individually stamped and written documents, books and their authors were burned, including the works of Erigena and Peter Abelard, the well-known French philosopher who was ordered by the Soissons Synod in 1120 to burn his own books…

To our bodies turn we then, that so
Weak men on love revealed may look;
Love’s mysteries in souls do grow,
But yet the body is his book.

A further publication, also entitled The Spirit and the Letter and The Evil Eye, was published in Parkett Magazine (#42, 1994) and in Writing Art, edited by Juliet Steyn (Pluto Press, 1995).  In that piece, I focused more tightly on handwriting and the letterform, outlining a phenomenology of the act of putting pen to paper and the power of letters as images:

“Words, and images”: these are most exemplarily shown to be fused in the very letterforms of the Roman alphabet itself. In this western tradition which just as traditionally denies its own ideogrammatic origins, I see the fleeting, rainbow bridge between two worlds which have called to me, and see them to be one. Here, so obvious as to be overlooked, so transparent as to be invisible, the floating world of letters on a page refuses reductive binarities by embodying multiplicity. Individually fascinating, caballistic, and in constant movement, each one of the 26 letters is both entire unto itself and is also an unassuming little nothing. Of their atomic fragments, molecular words are made.

[Image References: all images are from The Spirit and the Letter and The Evil Eye by Martha Fleming and Lyne Lapointe (1994); photography by Gary Kirkham]