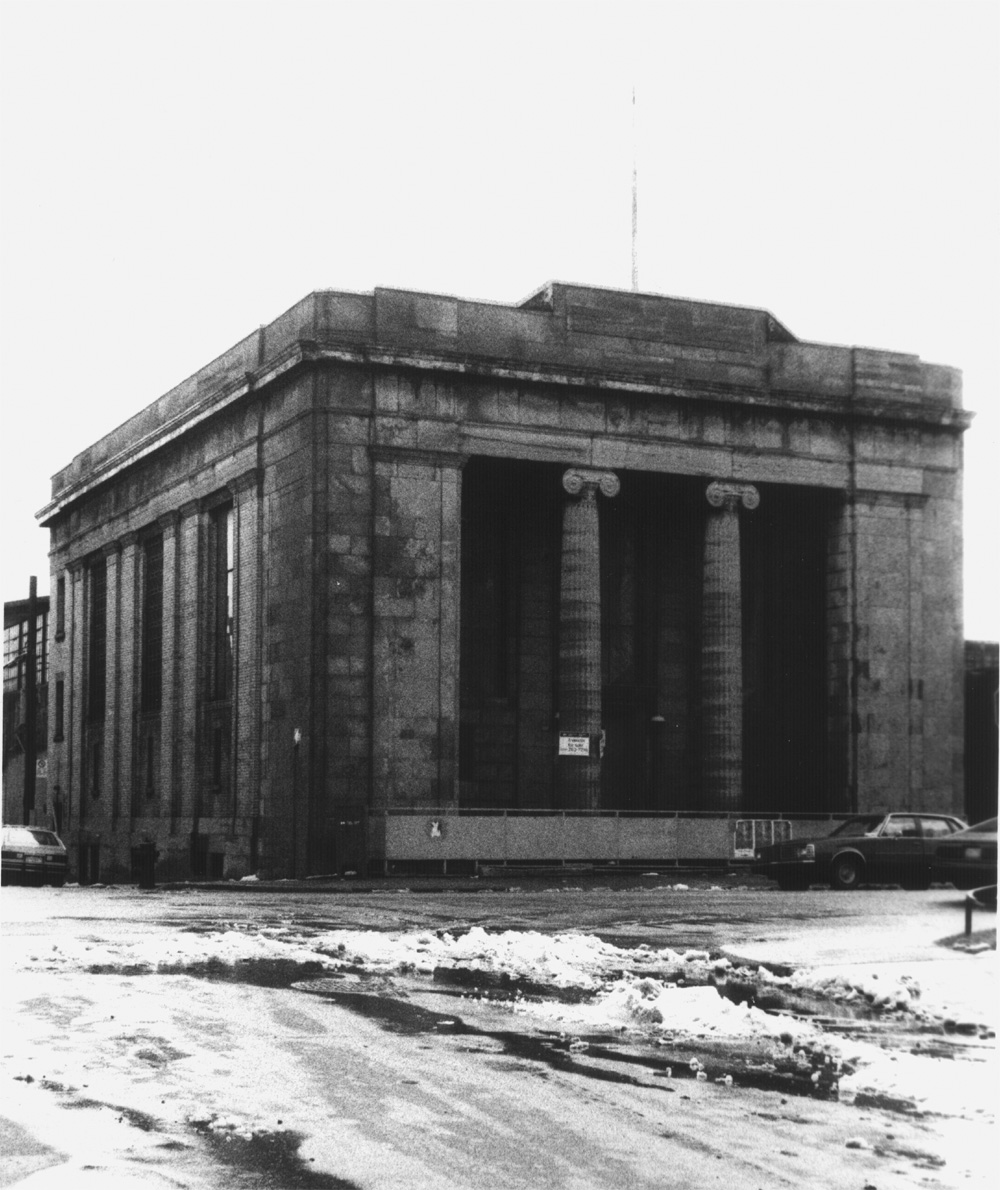 This major site-specific installation — a ‘history of the body’ before its time — took place over the entirety of an abandoned beaux arts Post Office Building at 1700 Notre Dame West in the Little Burgundy area of Montréal. Using everything from the sorting room floor to the surveillance corridor,  from the Postmaster’s apartment to the coal chute, we subjected the building, medical history and museological convention to analysis. It was the second of the ‘Montreal triptych’ of large-scale projects Lyne Lapointe and I made in quick succession through the mid-1980s. Working for the first time with both history of science and with museological convention, this project and the research we effected towards it changed the direction of my practice forever. To situate Le Musée des Sciences in its intellectual time, it is worth noting that it opened in February of the same year that Volumes II and III of Foucault’s Histoire de la Sexualité were published for the first time. It would be another five years before ZONE Magazine’s Fragments for a History of the Human Body and Sander Gilman’s Disease and Representation; another decade before Jean Clair’s Paris exhibition, l’Âme au corps (1993).

That this project, as early as 1984, meshed a critical inquiry into the history of the body with analyses of the representational practices in which the body is bound up, including museological conventions, still seems astounding to me. That it was effected by artists on the periphery as a self-produced large-scale work involving an entire abandoned building even more so.

From the press release:

Le Musée des Sciences is … a rigorous analysis of the socioeconomic order carried out over the bodies which that order constructs. [It] confronts the body of men, made machine by a Cartesian anatomy and the Industrial Revolution, with the body-in-pieces of woman, a body which has resolutely refused to look like its portraits. But this work is not ‘new figuration’ — representation is as much an institution as is the scientific method. The privileging of ‘bodies’ of knowledge and their vested interests are equally questioned here, as is the orchestration of the ‘body’ politic through social services rendered in just such buildings as are post offices.” It is important to understand the conditions in which this project was possible, conditions which range from Montreal’s francophone proximity to continental thought, to the number of empty buildings in North American cities, post 1970s stagflation. We were not alone in pioneering the occupation of public space through collective creative action: 1984 is also the year that Group Material — including friends Julie Ault, Doug Ashford and, later, Felix Gonzales-Torres — produced their first Timeline project, A Chronicle of US Intervention in Central and Latin America, at PS1 in New York.

Our projects were no less political, forms of feminism taking place in a register questioning cultural convention and aesthetics. All museum activities, from collecting and conserving to display and education, funnel towards acts of interpretation that are essentially representational, involving the conjugation of objects, fragmentary and rent from their original context, into a semblance of meaning outside that original context. With Le Musée des Sciences we sought to extend to, and fully encompass, museum practice within a group of cultural acts more readily familiar as ‘representational’.

Many artists have made museum parodies in their own studios. Some of us, as can be seen in Le Musée des Sciences, have sought to create alternative museums in highly charged spaces which are neither studio nor museum. Still others have parodied anthropological or natural history collections inside the confines of the fine art museum when they are given the chance. Another tactic is to drop artworks into non-art museum display contexts. This stream of work was one of which I was very aware, having participated tangentially in the development of the publication Museums by Artists (Bronson, ed., 1983) whilst working in distribution of Video by Artists at Art Metropole in Toronto.

Yet few had ventured into the science museum. In 1983, Lyne had an exhibition in Stuttgart (Kunstler Aus Kanada, Württembergischer Kunstverein) and we extended our stay in Europe by travelling to several cities in Italy, including Florence. Visiting the Istituto e Museo di Storia della Scienza (now the Museo Galileo) was the original impetus for the project which became Le Musée des Sciences. At the heart of the city which had been the centre of Renaissance art and science, this wonderful museum that was then still organised in displays which followed taxonomies that had actually emerged in the 17th and 18th centuries: it was pivotally inspirational in both form and content.

The chromatically ordered samples of geological materials on the top floor of the museum was still then arranged as a two-hundred year old teaching collection, and it presaged with great beauty a sense of so much of what colour would later be able to tell us about matter once Frauenhofer had invented the spectroscope. Several floors down, the extraordinary set of obstetrical phantoms tried to cover all possible positions of a baby inside the womb at birth. This is the moment at which ‘anatomically correct’ comes to mean, as it will for hundreds of years, a realistic representation of a dismembered body — ostensibly so as to focus the medical mind on the area of interest. Row on row of life-size wax and terra cotta teaching models presented what appeared to be stumps of surgically removed legs and semi-intact upper torsos, a carefully circumscribed layer of skin, fat, muscle and uterine wall excised to admit the surgeon’s gaze.

Further, the formally trained eye could observe, stepping from one set of Enlightenment instruments to another merely by passing through a gallery doorway, the clear isomorphic rapport between the barrel of a small cannon and that of a large telescope. It was this cannon and this telescope which first drew me to Feyerabend’s Against Method.

Nowadays, the role of artist-curator is commonly acknowledged, and I have certainly in the intervening years held that position a number of times as I have moved deeper into the museum world. Perhaps less familiar is the gravitational pull I felt in making Le Musée des Sciences with Lyne in 1984: it was a pull in the other direction — I was becoming a curator-artist. In the previous large-scale site work that she and I had created together, Projet Building / Caserne #14 (1983), there was a clear demarcation of roles: I was billed as the curator. By the opening day of Le Musée des Sciences, I was no longer at all sure of that. It would be some years before I realised that it didn’t really matter what I called myself, and many years before it stopped mattering to other professionals.

[Image References: all images are of Le Musée des Sciences by Martha Fleming and Lyne Lapointe (1984) with the exception of the second image on this page (Wellcome Trust Library Reading Room) and the fourth (Museo Galileo obstetrical models room, 1983). The third image on the page is of the working drawing with which we created the walk-on anamorphosis in the project.]